With early mornings, hot weather, and sore arms from throwing a ten weight with large flies, all day long, some people might question the appeal of fly fishing for Murray Cod.

But what about sight fishing to a freshwater fish, over a metre long, and in excess of 50 pounds? Well now I am skipping to the good part of the story.

Brandon, from Montana, USA, was visiting friends in Australia this January, and wanted to integrate some local fly-fishing into his trip.

From the first time we spoke, his objective was very clear. “I’d like to try and catch a Murray Cod,” he said. And so the date was set.

Woken at 4am from my grating alarm, I met Brandon in Bathurst and we travelled to the Macquarie river, ready to go at sunrise.

Due to a storm the day before, I was anxious to observe the river. But on arrival, it looked surprisingly clear. The barometer was a high – 1025 and rising.

“This looks very good…” I said, as we rigged up and set off walking upstream.

I explained the program and with a few casting adjustments, Brandon was launching the 6/0 surface popper in style. 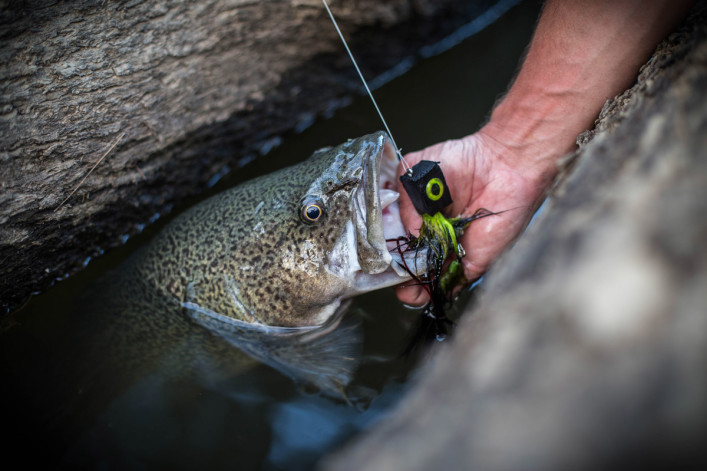 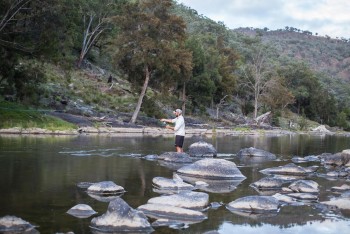 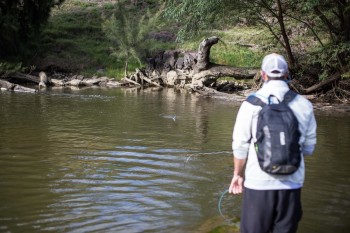 Before too long we had our first enquiry, but with no connection, our excitement was short-lived.

The next fish hit off the surface with an explosive take, but sadly popped the hook ten seconds into the fight.

What we saw next still haunts me….

Brandon and I slowly walked along the bank to see a water dragon lizard leave the tree and begin to swim across the water. Moments later, there was an explosion on the water, and…no more lizard. Knowing there must be a Cod nearby we carefully crept along the bank.

Then, appearing from a puff of disturbed water, (due to the lizard carnage, I guess), was the biggest Murray Cod I have ever seen. He was freely swimming about, clear as day.

“Make a cast,” I said to Brandon as he stood frozen in shock.

He managed a cast and within a second of his fly hitting the water, the large fish aggressively turned and consumed the fly. Brandon set the hook, and the fish took off.

Sadly moments later the leader broke and we were left speechless and awe-struck on the bank.

“That was the most crazy thing I have ever witnessed,” Brandon said as we dealt with the immediate aftermath. 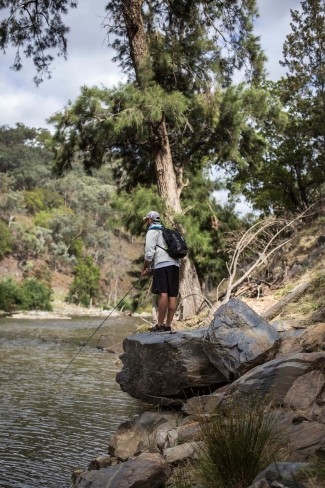 Working the fly around some likely boulders

Even though that fish haunts me, Brandon still managed to land his first Murray Cod on fly. A great looking fish smashed his surface popper from the edge of a fallen log.

“Not too many Americans have caught one of those, and especially not on fly,” I said as his stood grinning with his reward. 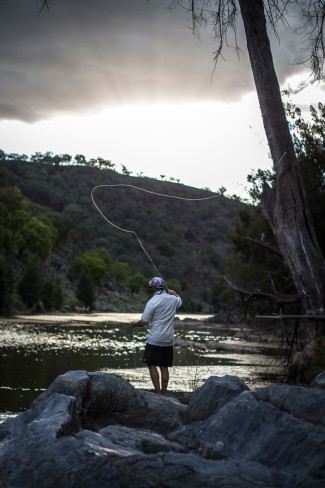 Brandon absolutely stoked with his first Murray Cod on fly

I may have still been hurting from our encounter with the monster, but Brandon was more than ecstatic to claim his first and well-earned Murray Cod on fly.

Our Murray Cod sessions have been quite successful this year and if you would like to join us for a guided day or have any questions about chasing them on fly, please get in touch.